What are bile acids and what do they do? 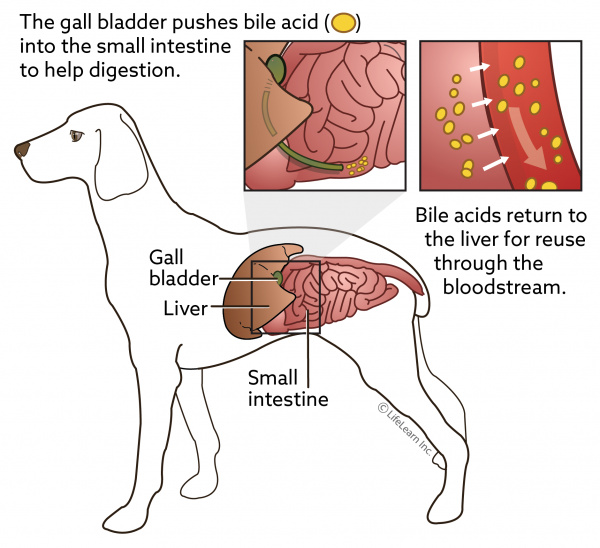 Bile acids are compounds that are made in the liver and stored in the gall bladder. Bile acids help with digestion of foods, particularly fat. When food is eaten, the body sends a signal to the gall bladder to contract and push bile acids into the small intestine. The bile acids mix with the food in the intestine and break down large, complex fats into small particles that can be absorbed more easily.

What is the purpose of the bile acid test?

The bile acid test is a very useful test that helps to determine if the liver is working properly. Specifically, the test answers three questions:

The bile acid test is based on the principle that a healthy liver can "recycle" bile acids, while a damaged or defective liver cannot.

How does the liver recycle bile acids?

When would the bile acid test be recommended?

The bile acid test could be recommended whenever there are signs that suggest the liver is damaged or defective. This would include when:

Is there special preparation for the test?

Yes. Fasting is generally advised for 12 hours before performing the test. The fast is an important part of the protocol, and must be strictly enforced. Even treats and chew toys must be withheld. The fasting period gives the liver time to retrieve any bile acids remaining in the blood stream. This means that before the test starts there are no bile acids, or only very low levels of bile acids in the blood stream.

How is the test performed?

The test begins by collecting an initial blood sample, called the resting sample or preprandial (“before eating”) sample. This establishes a baseline or starting point. A small tasty meal of canned food is then offered to the pet. The animal is usually hungry, and eats the food quickly. Exactly 2 hours after the meal is finished a second blood sample is collected, called the postprandial (“after eating”) sample. Both blood samples are tested for bile acid levels.

How important is it to follow the protocol closely?

The protocol for the bile acid test is simple, but it must be followed precisely. Errors such as failing to enforce fasting properly, feeding too large a meal after the initial blood test, feeding dry kibble rather than canned food, or collecting blood samples at the wrong time can all affect the validity of the test results.

Are there situations when the bile acid test should not be done?

Yes. The test requires that the pet’s stomach and bowel are working properly. Therefore, the bile acid test should not be used in pets that:

In addition, the bile acid test should not be done if the pet is being given bile acids as part of a treatment for liver disease. The medication needs to be withdrawn in order to get reliable results from the bile acid test.

How is the test interpreted?

If the liver is able to do its job, there would be very low levels of bile acids in the resting blood sample and only slightly higher levels of bile acids in the postprandial sample. This would indicate that bile acids released from the gall bladder during the test meal were adequately recaptured by the liver during the 2-hour period following the meal. The conclusion would be that the liver has enough cells to do its job, there is a blood supply, and bile is flowing properly.

If the bile acid test is normal, does it always mean the liver is completely healthy?

No. Sometimes the bile acid test results will be normal, even when there is a problem in the liver. This usually occurs when the problem is mild or affects only a small portion of the liver. In these situations, there is often no reduction in the overall ability of the liver to do its job, and the bile acid test will be normal, even though the pet has high levels of liver enzymes in the blood. In other situations, the gall bladder may not contract as expected, and bile acids levels will be low, even though a liver problem may exist.

If your veterinarian suspects that your pet has liver disease in spite of normal bile acid test results, additional diagnostic tests may be recommended to investigate the problem further.

If the bile acid test is abnormal, what then?

An abnormal bile acid test result indicates there is a problem in the liver, but it does not provide information about the cause, severity, or reversibility of the problem. Depending on how sick your pet is and how abnormal the test results are, your veterinarian may recommend monitoring the situation, or may suggest moving on to additional diagnostic tests including ultrasound of the liver, and possibly a liver biopsy.

© Copyright 2020 LifeLearn Inc. Used and/or modified with permission under license.